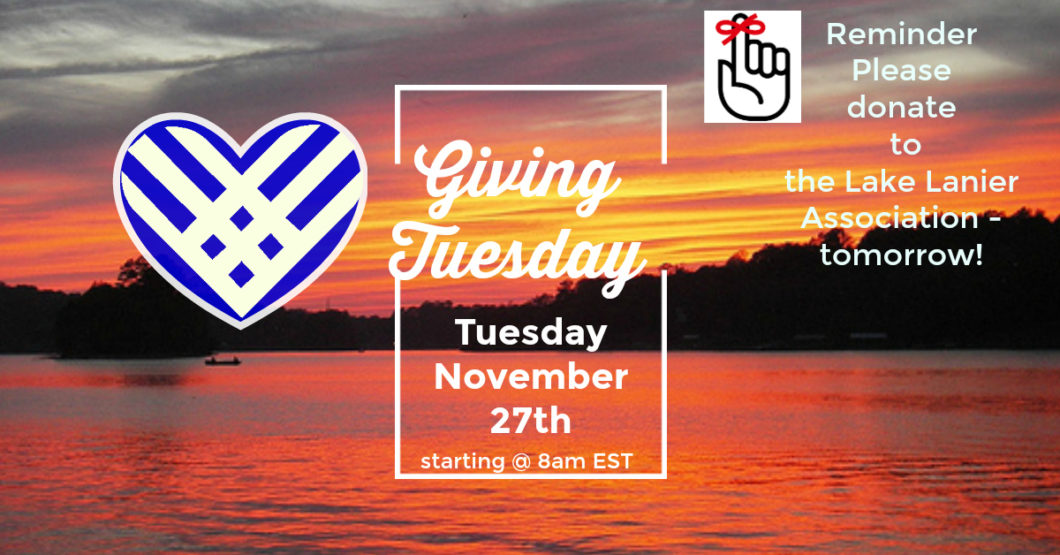 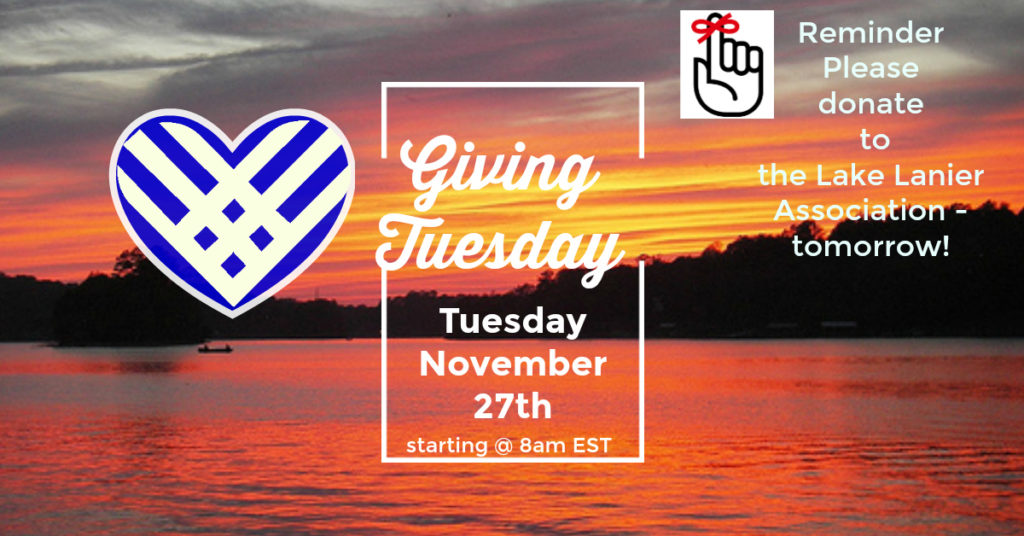 Love Lake Lanier and its’ beauty and recreational activities? Tomorrow 11/27/2018 is Giving Tuesday and starting at 8 am EST we ask you (or your business) to please donate to The Lake Lanier Association to help LLA with its’ mission to keep Lanier Clean, Safe and Full. This year, thanks to Facebook, your donation will go a long way. Facebook will match your donation, up to $20,000 per donor until they reach $7 million in donations. This is a national match program, so please donate early starting @8am EST before the matching funds are gone. Tomorrow morning, please go to the main FB page: https://www.facebook.com/donate/2084361394962486/ and click the donate button. Facebook will guide your through the rest. LLA is charitable organization registered with the IRS, so this donation is tax deductible. FB is not charging us any fees so 100% will go to the LLA. So whether you are a boater, boarder, sailor, fisherman, skier, or just enjoy Lake Lanier’s Beauty – Please help us to continue all of our Initiatives including: Full Lake, Rip Rap, Clean Lake, Annual Shore Sweep, Adopt-A-Lake, Property Owner Pledge agreement, Safe Lake, Solar Lights program, Abandoned and derelict docks and vessels removal, LEGISLATIVE INITIATIVES, + much more. If you would like to know more about what we do and where your contributions will go- please take a few minutes and watch this video https://www.youtube.com/watch?reload=9&v=AcNVrBheLCc 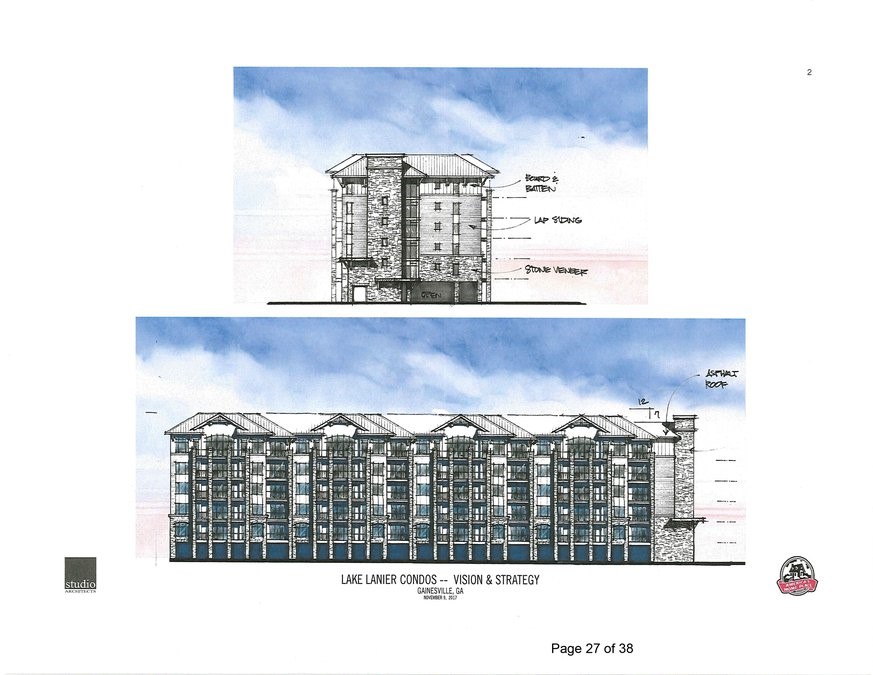 An “upscale” condominium development connecting to the Gainesville marina is scheduled for construction in the summer of 2019 after the City Council OK’d a rezoning for the property on Tuesday, April 17.

The two six-story towers proposed to overlook Lake Lanier would include more than six acres of shorefront property that remains heavily wooded today.

The property, located off Dawsonville Highway, has remained undeveloped since being rezoned in 2000 for a mixed-use development with office, bank and retail space.

Jim Walters, a local attorney representing the developer, Lake 53 LLC, said the condos would likely be priced for “empty nesters” and represent a more restricted use of the site than the commercial projects the land is already zoned to allow.

Walters said this would also limit traffic into the site.

City planning officials said the Georgia Department of Transportation will not require a traffic impact study for the project.

The towers would be no more than 80 feet in height. The property would include a clubhouse, cabana and pool. A walkway with railing leading to and from the marina would also be built.

Concerns about stormwater runoff into the lake that were also raised last month were not addressed this time.

A representative for the Lake Lanier Association had said the organization would like to partner with the condominium developer to monitor runoff if and when construction moves forward.

originally posted in the Gainesville Times 4/17/2018 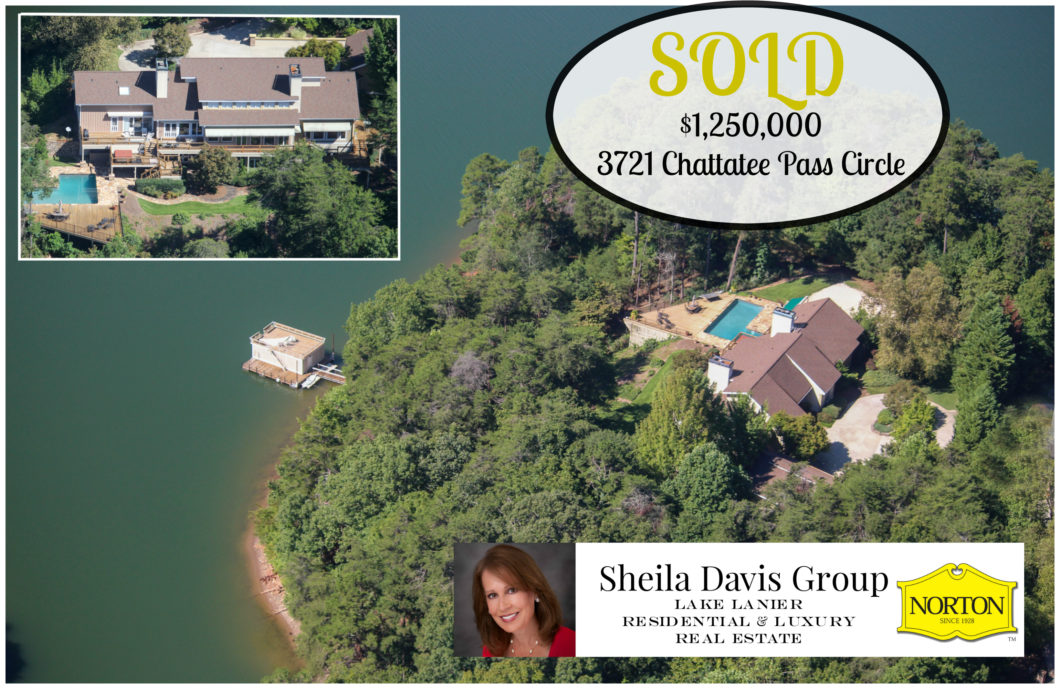 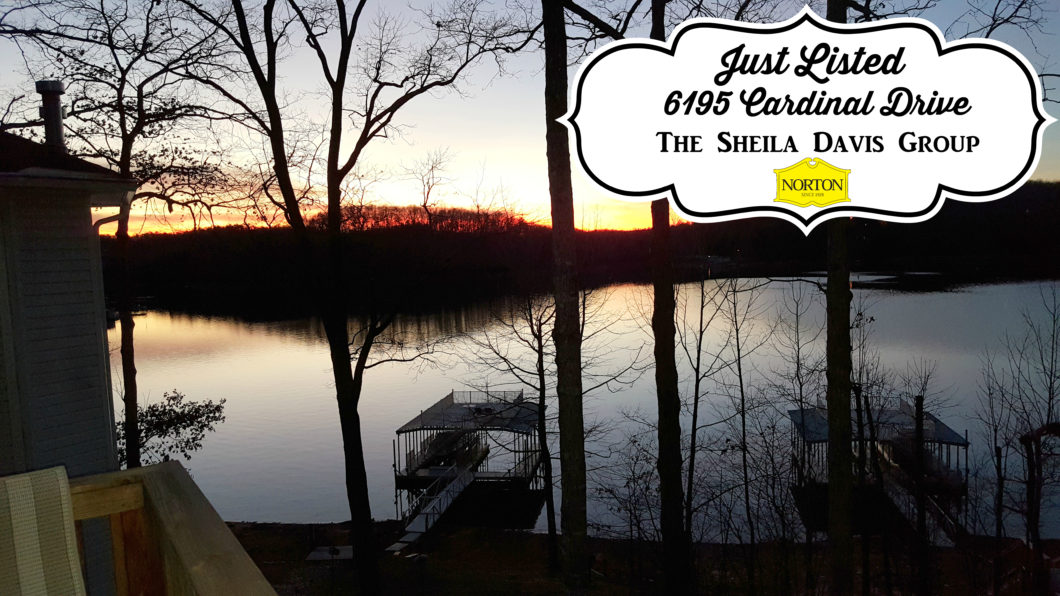 Vacation every day with million dollar panoramic views of Lake Lanier! Just steps to deep water! This home comes with a twin slip aluminum party dock with a boat hoist. The well maintained ranch home features an open plan and two finished levels. The main level kitchen open to great room with a fireplace, hardwood floors, and has walls of windows in the dining room. There is a sunroom to relax in your hot tub. The terrace level features a second kitchen, family room with a fireplace, and a fitness room/recreation room. Located in the gated Timberridge neighborhood with pool and lighted tennis court, and boat ramp. The boat and golf cart are negotiable with the sale of this home! FMLS# 5815140, Offered at $695,000, Call 770.235-6907 for an appointment to view 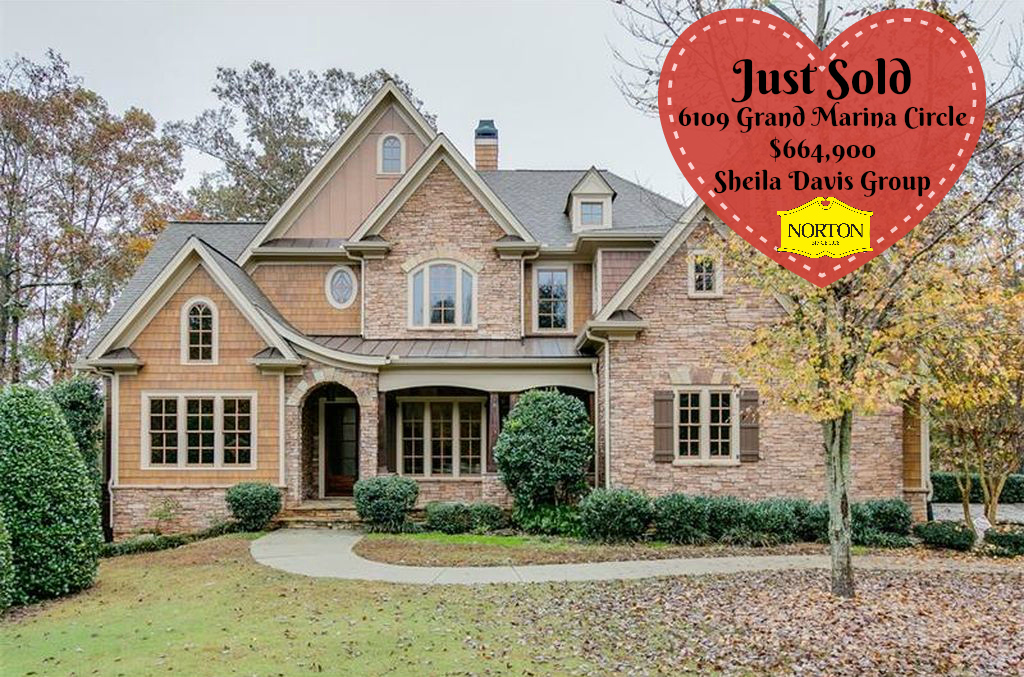 We Just sold this home in the Marina Bay neighborhood on Lake Lanier which also came with a boat slip. Thinking of selling yours? Inventory is low and NOW is the perfect time to list for spring, Give us a call at 770-235-6907 for a no obligation consultation. 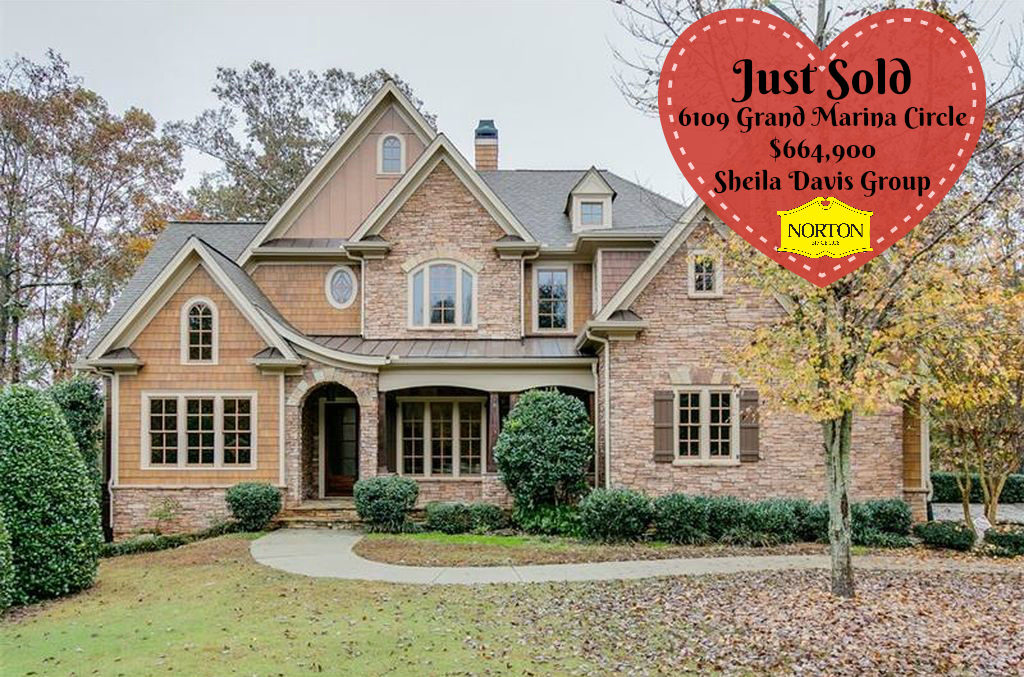 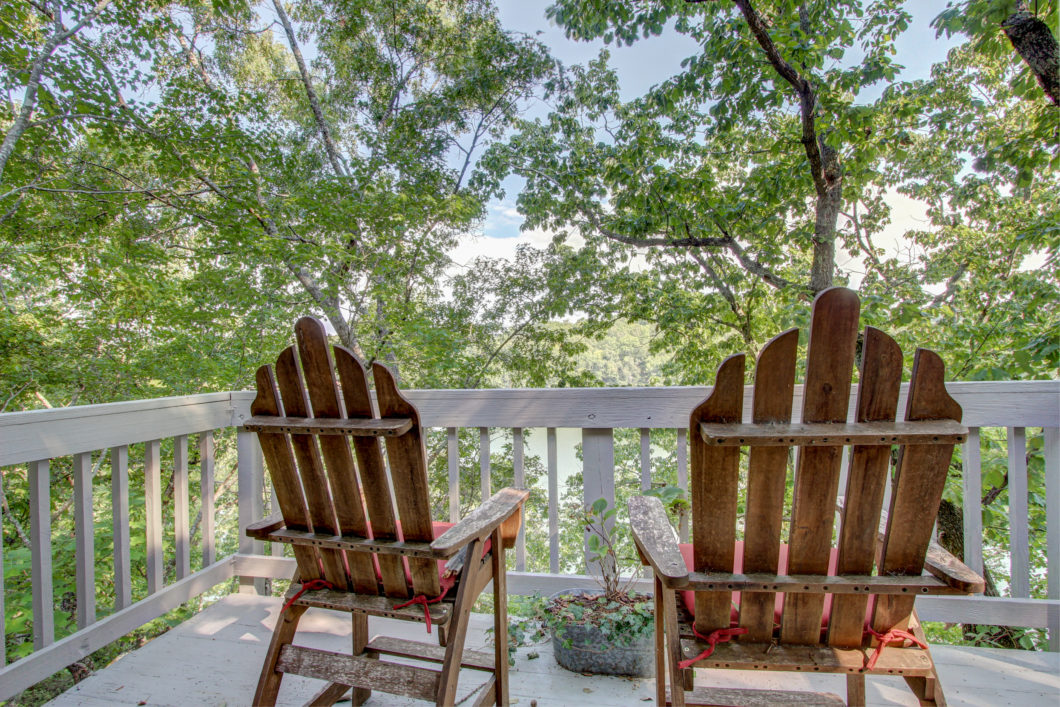 The Sheila Davis Group has just listed your perfect “Second Home” on the lake! Enjoy this cozy, warm and inviting waterfront Cottage on Lake Lanier complete with a top of the line private 32′ x 32′ single slip covered dock that is always in super deep water. The inside of the lakehouse features pine floors, board & batten white washed walls, and charming kitchen with an island that is open to the family room with stone fireplace. The beautiful master suite is located upstairs and has a balcony to view the lake. There is a lovely screened porch on the main level and decks on every floor! The terrace level features a bunk room plus a bedroom and full bath that opens to the covered porch. You will never want to leave this inviting Lakehouse! Convenient to GA400, 157 N. Chestatee Point, Dawsonville, Georgia 30534, Offered at $389,000, Click here for Details, To schedule an appointment to see this lakehouse call  770-235-6907 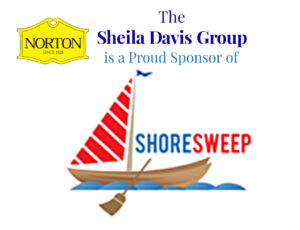 Don’t waste your time searching for Pokemon. Do something constructive! Use your sleuthing skills as one of the advance scouts in the battle against garbage on the shores of Lake Lanier.

The Lake Lanier Association is looking for volunteers to eliminate treasure troves of trash! Advance scouts will be dispatched by General Joanna Cloud as spies in the Battle of Flotsam and Jetsam on Lanier.

Yes, you may use secret code names and wear camo as you identify where the foe (junk) is entrenched along Lanier’s shoreline. That way, on the day of Shore Sweep 2016 — Saturday, September 24th — our army will know exactly where to go to snatch the trash.

The Lake Lanier Association needs volunteers with motorboats (sorry, kayakers and canoerists) who will use the free TrashOut app on their mobile devices to locate targets. Once you download TrashOut, simply set your profile to affiliate with the Lake Lanier Association organization. Then, win the fight against garbage!
Signup to be a scout here: http://www.signupgenius.com/go/10c0e4aa5a92faaf58-shore/
written by Robert Southerland, LakeLanier.com 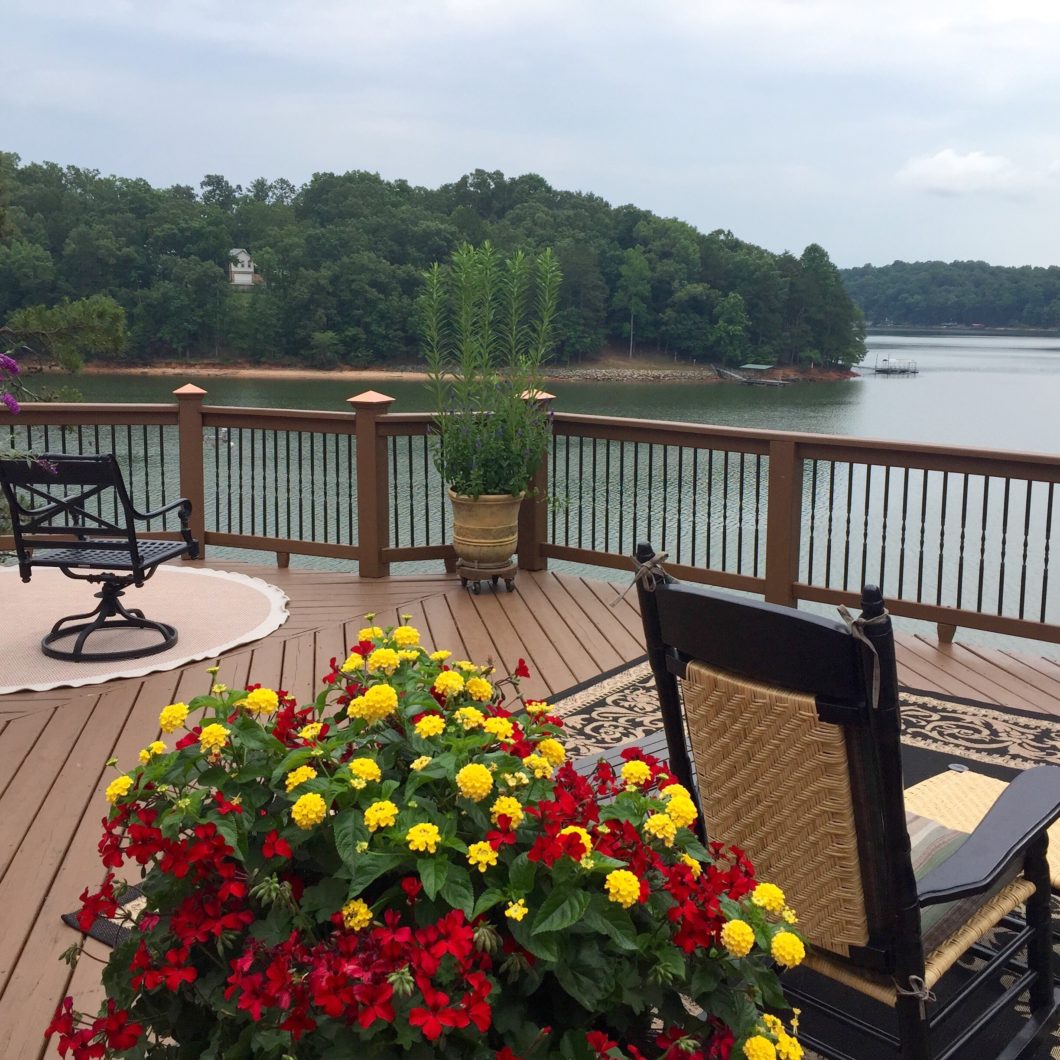 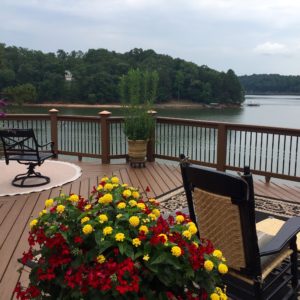 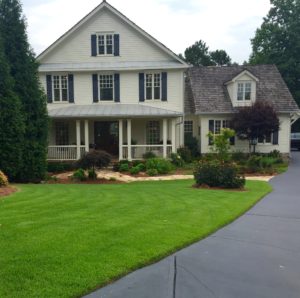 As part of the dynamic Sheila Davis & Company team I am fortunate enough to be able to work with people who are incredibly interesting and due to the nature of what we do I am often in their homes, which so intrigue me. A prime example of one such occurrence was yesterday’s open house at a Lake Lanier home that we have for sale at 514 River Sound Lane in the luxury golf and lake community that is Chestatee. This home is located directly on the lake with expansive big water views and where the approach to the home is as picturesque as any drive could possibly be. Just making my way to the home is always such a welcomed experience as the scenery runs the gambit from luscious golf course views and tree lined streets, to hints of big water and the feel of a community that is proud of all it represents. The homes are lovely and the yards impeccably kept and none no more so than the site of our open house luncheon on Tuesday. The owners of this home have poured their lives into the home and grounds and it is so evident the minute you drive up. This impeccably built and maintained home speaks volumes as to the nature of its devoted owners and their love of beauty, fine things, and the home they built together. The front porch alone looks as if it should be in a magazine whether the topic be “picture perfect porches” or “perfecting the art of plants and planters”! All of what greets you outside the home is a prelude to what awaits inside as this home has every element desirable in a home on Lake Lanier. It is designed to be a place of respite full of every creature comfort while it is apparent that no stone has been left unturned in its upkeep and attention to detail. Once inside you see the gorgeous view to the water and all the outside living spaces dedicated to a life well-lived on the lake inside and out. The home sits on a huge fenced lot that has been as meticulously designed and well maintained as the home. As you enjoy the seating areas along the lake shore you can take in the sights and sounds of the lake and the marina close by.  If you haven’t taken the time to explore just what this home has to offer now is the time to do it! Whomever is lucky enough to be the new owner of 514 River Sound Lane will be lucky indeed! For a video tour go to: www.514RiverSoundLane.infohttps://www.sheiladavisco.com/wp-admin/media-upload.php?post_id=5139&type=image&TB_iframe=1 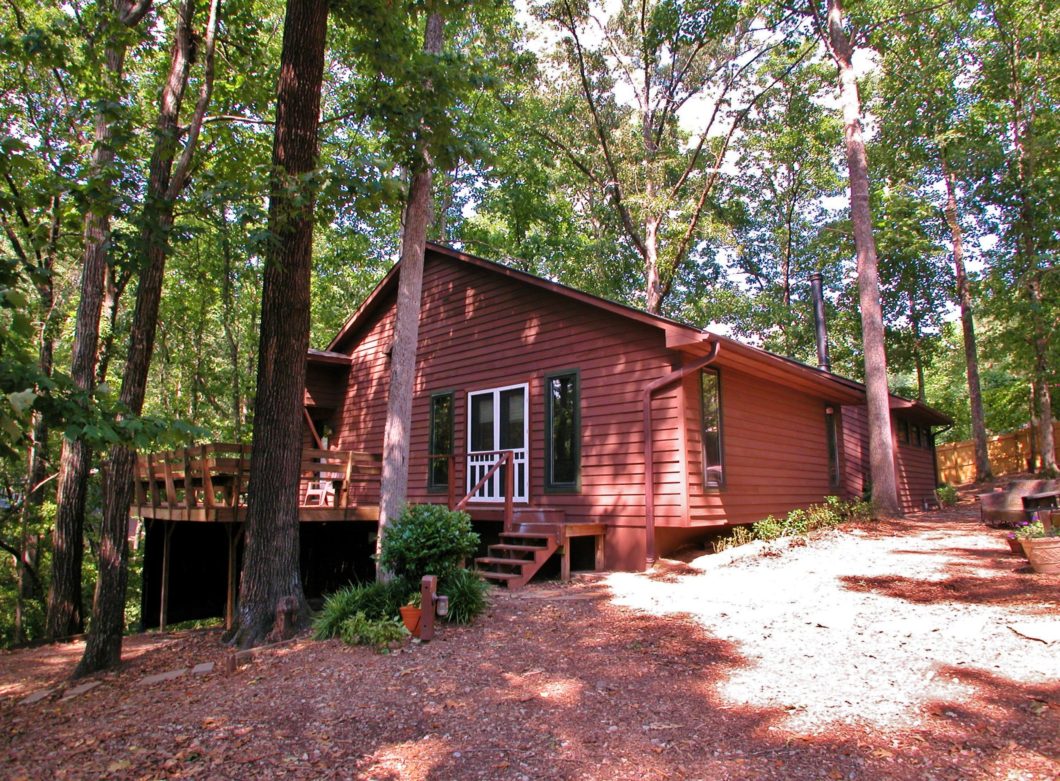 At Sheila Davis and company we have just listed 9336 Dogwood Place in Gainesville for $349,000! This great INCOME PRODUCING LAKE LANIER PROPERTY is a cedar-sided DUPLEX that is an investor’s dream! It has a fabulous rental history and borders Lake Lanier w/99′ of Corps frontage. Though there is no dock or permit allowed there is a level walk to the lake so bring your kayak and jump in! Gorgeously appointed with high end finishes and completely updated. Each side of the duplex has 2 bedrooms and 1 bath, updated kitchen, open living space, fireplace and deck with separate entrances and utilities. Seasonal lake views! Each unit has a garage/basement for your boat, jet skis & cars! Vanns Tavern boat ramp is close so you can launch your summer fun from there! The very best aspect of this property just might be that it is located only minutes from Port Royale marina! If you are looking for an opportunity to own a place on Lake Lanier that will pay for itself, this could be it! The buyer of this duplex could move in one side and rent out the other, use both units as investment properties to rent, or live on one side while using the other as a mother in law suite or guest home. Regardless of how one chooses to utilize the duplex, this well priced property has so much to offer and would be a win-win for the buyer looking to live on Lake Lanier or own income producing property on this beautiful lake in Gainesville, Georgia! Please contact Sheila Davis & Company today to schedule a showing. Someone on our Lake Lanier Realty team would be thrilled to take you in! Contact Sheila at 770.235.9607, or sdavis@gonorton.com. Cindy Ballard at 770.355.6777, or cballard@gonorton.com. Nicole Columbo at 678.858.0265 or ncolumbo@gonorton.com For additional details click here Listing details: 9336 Dogwood Place 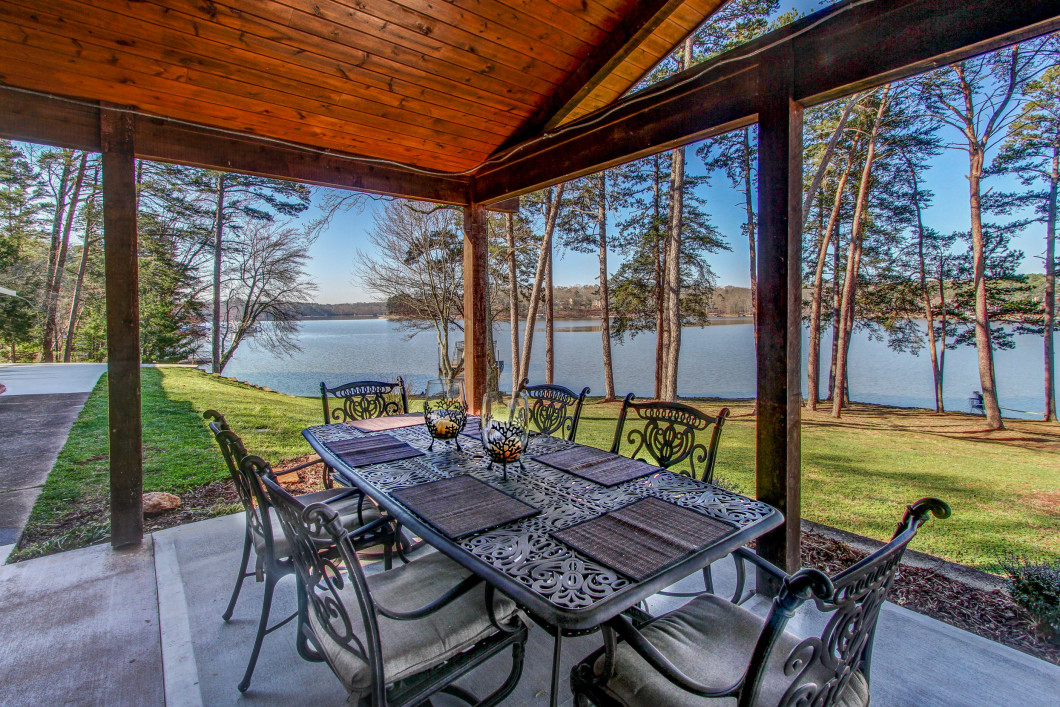 …Hold onto your heart, for this one is special. This four bedroom, three bath cottage is located in Gainesville, in the North Hall area, (Little River 12LR). This 1.34 acre uniquely private point lot, features open water 180-degree lake views with nightly sunsets! There is a gentle grass to water walk, 475 feet of water front footage, a rip rap shoreline, and deep water. A single slip covered dock with sun deck is in place, with a 32×32 twin slip dock permit. This charming home features a stunning, vaulted ceiling in the open living area, kitchen and breakfast room with an oversized masonry fireplace, four bedrooms with three full baths, and a large vaulted recreation room surrounded with windows. The covered vaulted porch with tongue and groove ceiling provides room for all of your outside entertaining. Enjoy panoramic views year round! This one level living makes a perfect down sized home for soon to be empty nesters, a fantastic second home “get-a-way”, or great investment property. Located just 10 minutes to Gainesville shopping and medical district. Don’t wait…..this one may go quickly! Offered at $749,000 Call Sheila 770.235.6907