Hall County claims title of most-expensive mansion on the lake 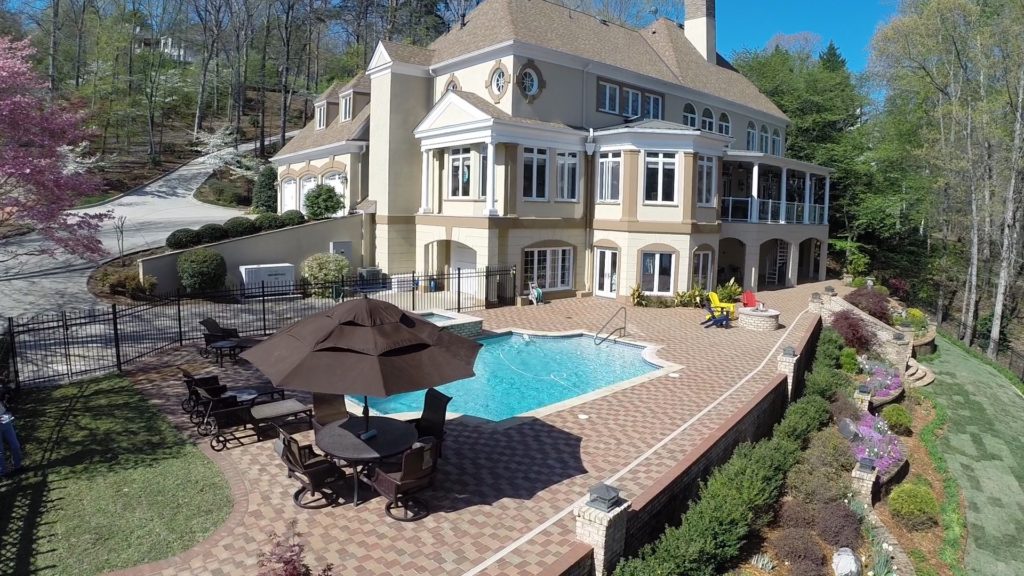 Pull out those checkbooks: The most expensive house currently on the market on Lake Lanier is in Hall County.

The palatial property at 4890 Serene Shores Drive checks in at $8.5 million. For that, a buyer will get six bedrooms, eight full bathrooms, six half bathrooms, a couple of kitchens, 26,797 square feet of living space and some stout gates.

And with the stock market booming, somebody might just buy the place.

Always a spot for retired couples or people looking for a second home, Lake Lanier’s high-end home market has seen significantly more activity in the past 12 months as Americans become more optimistic with their money.

It’s a welcome change for those doing business around the lake, where the 2007 housing market collapse was a sopping wet blanket over one of local real estate’s hottest high-dollar markets.

“They got hit bad,” Lake Lanier appraisal expert Mary Thompson told The Times. “If they were below the million-dollar mark, it was on average a 30 percent hit. If they were over a million, it was worse.”

The Lost Decade is over: Lake Lanier values on the upper end are about where they were in the price peak of 2006, and that hasn’t stopped people from buying homes.

Sales of homes valued at more than $1 million are up 20 percent in the past 12 months, according to the Norton Agency’s Sheila Davis, who specializes in lake sales.

She credits the boost to an improving economy and low interest rates, but the economy has been the shining star — half of the people who bought homes at $1 million and up paid cash.

The lake still gets its business executives, who each day mingle will the folks filling up Ga. 400 on their way to and from Atlanta, but more and more the people buying big around Lake Lanier are entrepreneurs.

“It seems like at least half of our buyers own their own companies, their own businesses,” Davis said. “They can spend a lot of office time at home.”

About 20 homes worth more than $1 million have sold in the past 12 months. Most of those are being bought by the people you’d expect: empty-nesters and older Americans looking for an easier quality of life than they were getting in their choked metropolitan areas.

“However, we are seeing younger buyers,” Davis said. “My last million-dollar sale, the buyers were in their 30s and they were buying a full-time home.”

Another new experience for lake realtors: Talking to men about kitchens. The Norton Realtor said she’s seeing that the “men are all about the kitchen” in the high-end homes being sold around the lake.

They’re looking for large kitchen islands and — this one is popular no matter your tax bracket — open floor plans.

While the south end of Lake Lanier is the most populated, high-dollar homes are dotted around the lake in either luxury neighborhoods or behind gates on a spur road, like the home on Serene Shores Drive, Davis said.

The Hall County mansion is a top-notch collection of what deep-pocket buyers are looking for in their lake homes post-recession.

“They want covered porches, covered decks, patios — all of that outdoor living,” Davis said. “And that’s expensive. They’re major add-ons to these properties.”

Outdoor living means outdoor entertaining: Many of the most expensive lots around the lake have expansive terrace levels to get guests out of the house and closer to the lake.

Because at the end of the day, they’re paying for lake. Case in point: 6010 Chimney Springs Road in Buford.

In 2004, a pair of doctors bought the lot and its 1970s cottage with a plan to build a new home around the cottage.

When they finished, the lot had a pool, in-home bar, a pair of patios and 6,000 square feet of space. It was featured in “My Big Amazing Renovation” on HGTV.

Sheila Davis, is a lake resident since 1994, and lead agent for “Lake Lanier’s Finest” aka The Sheila Davis Group, Specializing in Lake Lanier Real Estate at The Norton Agency. You can contact us at 770-235-6907 or through our website www.LakeLaniersFinest.com.